The Life of a Pastor: Service, Stress, Solitude, Sacrifice

This weekend, my wife and I traveled to New Mexico to join a dear brother in Christ, my friend, mentor and pastor and his family for the memorial of his 22 yr. old son who died in an accident. 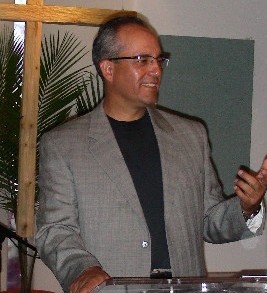 My friend Jimmy (his testimony of how he came to Christ is also an incredible story of grace) and his wife Brenda have been my friends for over 30 years. I met Jimmy as a 13 year old who didn’t know Christ. He came to know me as he witnessed to my sister who was an alcoholic. He invited her to a new Hispanic church plant. His Spanish was rough but he persevered and eventually became fluent enough to communicate. Jimmy took interest in me as I became a Christian. He took me to his home as a recently married man. I met his wife Brenda as well. I spent a few nights in their apartment and observed this Christian couple. This was my first encounter with a Christian married couple and it left an imprint in me who came from a family with only a mother and sisters and no male role-models. I listened and watched intently. It was them who “introduced” me to Keith Green’s music to which i still listen. My friend and his wife wanted to serve the Lord, so he joined the Army in order to finance his ministry education. They left. I continued my journey of faith.

We were reunited again when they came back to California and he was already working as a church planter-pastor in San Fernando Valley. He had children then. This was a rough area to minister and I joined him for a month-long in 1988 to help him. As an 18 year old, I continued to observe his family life and ministry. I shadowed him and participated in all areas of ministry. I preached, I led worship, and sang in a funeral (my first experience ever that left an indelible memory). After this, he continued to serve and so did I in my home church. In 1991, he performed our ceremony for my wife and myself.

As time passed he continued to minister (as did I as a full time church planter and pastor for 6 years) and was led by the Lord to go back to his native New Mexico where he became a pastor of Grace Community Church. He has been there for over 18 years.

This weekend, I was able to spend time with him but in a circumstance where his own life has been struck with pain in the death of his oldest son. Even in the midst of this, he was still ministering to others. His nephew, who is preparing himself to be a minister, led the memorial service under his mentoring. This young man also preached on Sunday. (Later on during the day, he gave him some tips on preaching). During the memorial, after the young people expressed their sentiments about his son, he stood up, went to where they were and hugged them. He also said some words to them that I couldn’t hear. All throughout the reception he was interrupted and bombarded with questions and comments. Not once did he try to leave. As he sat next to us, my wife brought him food but even after entreating him to eat, more disruptions came. I am not sure he enjoyed his food.

After the service, we went over his home which was packed with relatives and some friends, including us. Hospitality was taking place without any hesitation or complaint. This is a norm in his home since I’ve known him. They love people.

Today, during the service, he was there with his wife. He even went up and shared with the church why he wasn’t preaching. He could of just not shown up and the church would have understood the obvious reason of his absence. But he didn’t. He was there.

After the service, my wife and I spent time in his office as we ate lunch. Interruptions came as we got started in conversations. He ministered to a lady with financial troubles. He quickly took action to solve her problem. His sister came over as well to update him on her car troubles which was also getting solved. As we talked he shared how stressful pastoring was, but he was not complaining, just sharing with me. He shared all of the wide range of experiences he dealt with as a pastor. Marriages. Death (some very tragic). Divorces. Problems of all sort (not excluding the three attempts to oust him as a pastor).

“To deny oneself is to be aware only of Christ and no more of self, to see only him who goes before and no more the road which is too hard for us. Once more, all that self-denial can say is: “He leads the way, keep close to him.””

The words of Jesus resonate:

“Peter began to tell Him, “Look, we have left everything and followed You.” “I assure you,” Jesus said, “there is no one who has left house, brothers or sisters, mother or father, children, or fields because of Me and the gospel who will not receive 100 times more, now at this time — houses, brothers and sisters, mothers and children, and fields, with persecutions — and eternal life in the age to come.” – Mark 10:28-30 HCSB

This is what our Lord promised those who give everything to follow Him.

After this weekend, I am reminded of the work of pastors. I have deep love and appreciation for my friend and his family. I am certain that nothing pastors do will be overseen by our Lord. Their reward for their sacrifice and faithfulness is certain. Jesus promised it. His words are faithful and true.